Each post has a reaction counter at the bottom. Anyone can click on the heart to increase the counter. It's not linked to any accounts and doesn't mean anything, but here are the posts that have the most reactions.
This Website: CSS
Post at 9:01 PM (flowers, nyc, photo)

Hudson Yards on a beautiful day.

I can’t stop listening to this.

Re: Police Erupt in Violence Nationwide

The ongoing protests following the killing of George Floyd were caught up in violence again on Saturday, as police all over the country tear-gassed protesters, drove vehicles through crowds, opened fire with nonlethal rounds on journalists or people on their own property, and in at least one instance, pushed over an elderly man who was walking away with a cane. Here are some of the ways law enforcement officers escalated the national unrest.

This is exactly what I’ve been seeing unfold on Twitter over the past few days. The original protesters of the killing of George Floyd don’t seem to be the ones out of control here.

Re: De-contaminating a surface with the coronavirus is a two-step process. A biohazard cleaner says people are skipping the first step.

Also from the article, here’s a look at how long the virus lasts on different surfaces (you can see why there was hesitation around recommending mask use): 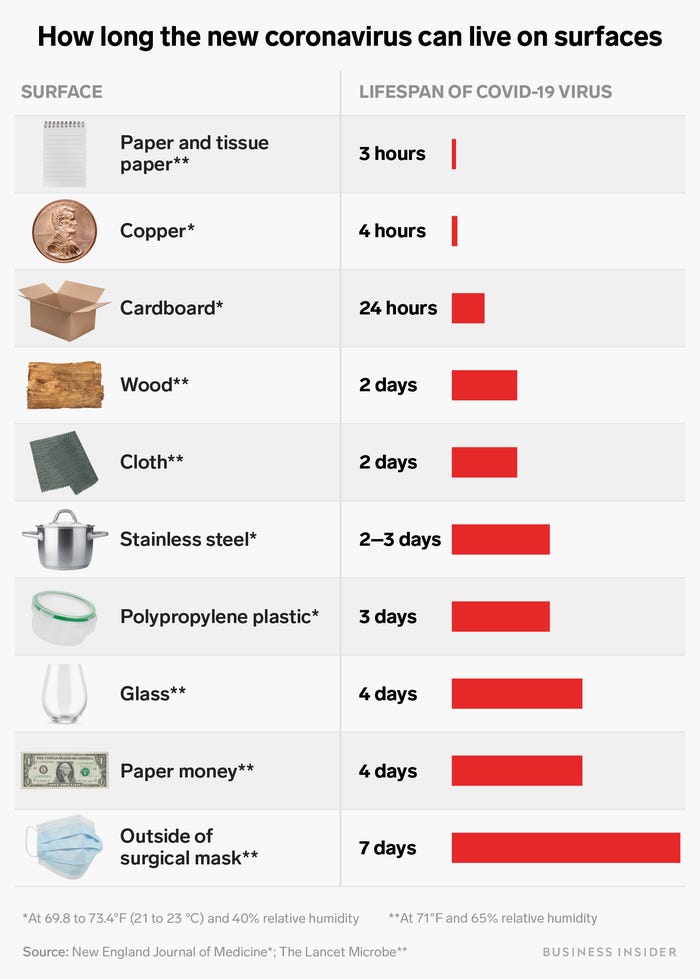 By the time the evening’s protests were over, the frustration of the New Yorkers gathered had run headlong into the aggressive mass-arrest protest-policing tactics of the NYPD. Some protesters were in the hospital. Police vehicles were on fire. And with more protests scheduled over the weekend and in the days ahead, there was every indication that the outpouring of anguish over police violence, and the violent police response to it, will only continue.

Writing Code for my Twitch Stream
Re: More than 113,000 people across the globe have recovered from the coronavirus

Re: Opinion | Wearing Masks Must Be a National Policy

If you can find cloth masks (there is still a shortage of medical grade masks) please get some and wear them whenever you leave your home.

A picture of a truck in the snow.

Re: Should You Use Antiviral Tissues?

I bought some anti-viral tissues recently just because I saw them while I was shopping and figured it was a decent thing to get. But every time I used one I wondered if they actually helped at all. I finally looked it up and… nah, they don’t really seem that effective.

Re: This is the end of the office as we know it

I can maybe see this happening:

These new numbers represent a seismic shift in work culture. Prior to the pandemic, the number of people regularly working from home remained in the single digits, with only about 4 percent of the US workforce working from home at least half the time. However, the trend of working from home had been gaining momentum incrementally for years, as technology and company cultures increasingly accommodated it. So it’s also likely that many Americans who are now working from home for the first time will continue to do so after the pandemic.

I can definitely see this happening:

There’s a lot more at play than what employers and workers want, of course. The economic impact of the pandemic will likely force many employers to cut costs. For companies to reduce their rent obligations by letting workers work from home is an easy solution, one that’s less painful than layoffs. In Lister’s words, “The investor community is going to insist on it.”

Lots of interesting predictions in this article.

Re: The Coronavirus Was an Emergency Until Trump Found Out Who Was Dying

The implied terms of the racial contract are visible everywhere for those willing to see them. A 12-year-old with a toy gun is a dangerous threat who must be met with lethal force; armed militias drawing beads on federal agents are heroes of liberty. Struggling white farmers in Iowa taking billions in federal assistance are hardworking Americans down on their luck; struggling single parents in cities using food stamps are welfare queens. Black Americans struggling in the cocaine epidemic are a “bio-underclass” created by a pathological culture; white Americans struggling with opioid addiction are a national tragedy. Poor European immigrants who flocked to an America with virtually no immigration restrictions came “the right way”; poor Central American immigrants evading a baroque and unforgiving system are gang members and terrorists.

Re: Come On, People, Enough With These Covid Conspiracies

We have to be the ones who double-check information from valid sources, picking through every headline and paragraph — because nobody will do it for us. Unfortunately, there just aren’t enough of us who have either the media literacy or the internet know-how to spot the jig. That’s why I’m so disappointed by the people who should know better — who already understand the invisible hands stirring up fear and distrust. Watching these people share articles from ThisNewsIsFakeDotCom is the truly infuriating and inexcusable new development to come out of all of this.